Person, place, thing, event, or opportunity—it’s important to know what it is that you’re reaching for.

To aspire is defined as something you actively desire to reach, a goal you’re working toward.

What are you going to do with it once it’s within reach? Will you grab hold, or will you let it slip by?

In my experience, the act of reaching out sets everything in motion. That’s why I plan before I reach out, so when I do catch hold, I know my next steps.

What are you reaching for?

The world is a really big place, but I make a difference and so do you. Each of us—whether we want to, or not—leave an impression.

The deciduous leaves have all but disappeared in our neck of the woods. And while this leaf impressed me because of it’s tremendous size…

…this leaf, though much smaller, left a longer lasting impression.

My goal is to leave the slightest footprint on the planet, while at the same time making a lasting impression on its inhabitants—one that is positive, uplifting, constructive, and healing.”

“People who strive for something significant, whether it’s learning a new craft or raising moral children, are far happier than those who don’t have strong dreams or aspirations,” says psychologist Ed Diener. “As humans, we actually require a sense of meaning to thrive.”

Have you defined the impression you want to leave?

One of my young clients — Matthew — recently handcrafted a dreamcatcher for me, thoughtfully adorning it with crystal beads and a feather. 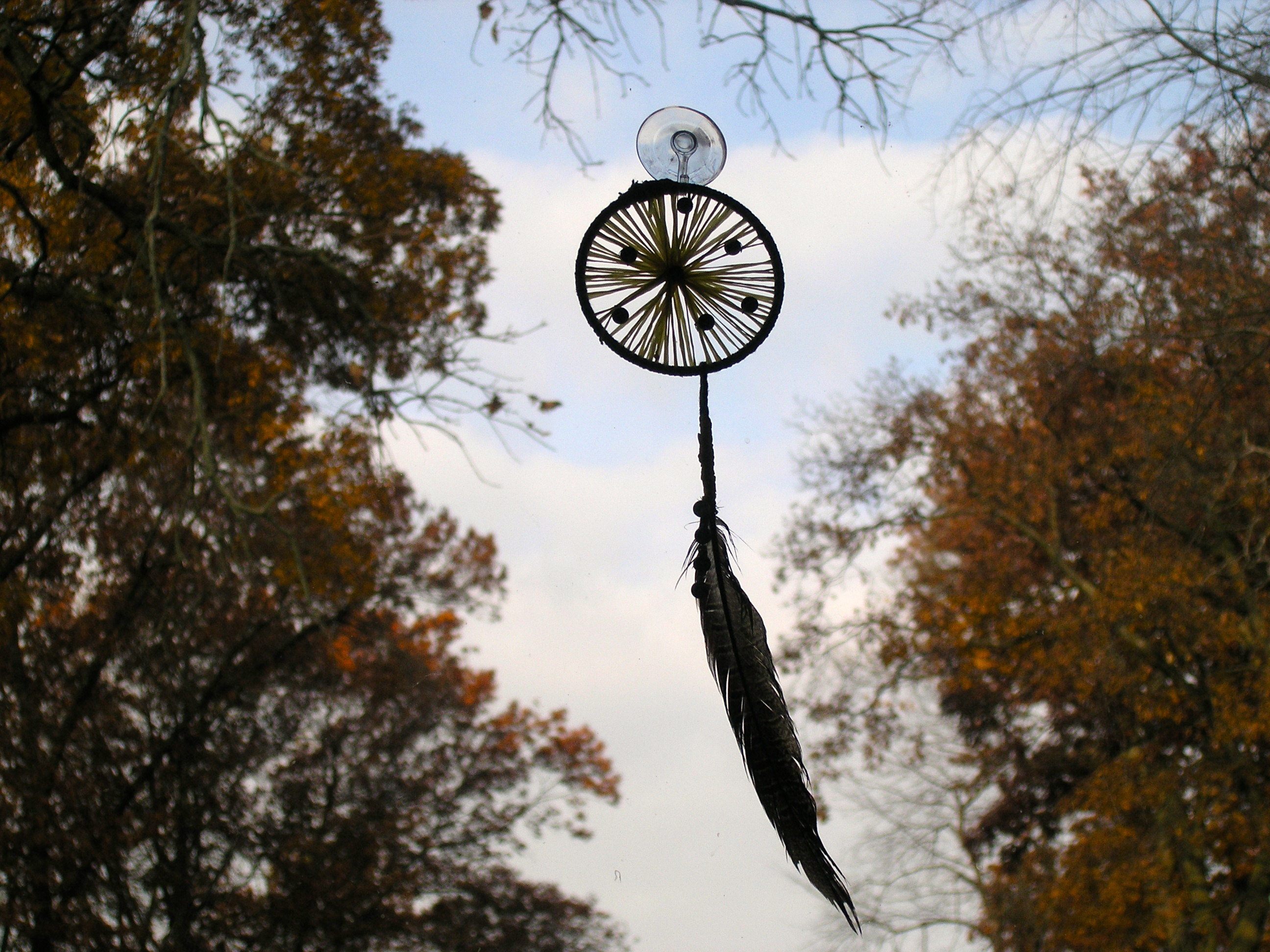 According to Native American lore, our nighttime dreams are sent by sacred spirits as messages. The openings in the web-like pattern allow good dreams to reach us, while the strands of the web trap bad dreams, only to disappear with the first light of dawn.

The materials used to make dreamcatchers have a special meaning:

“Humankind has not woven the web of life. We are but one thread within it. Whatever we do to the web, we do to ourselves. All things are bound together. All things connect.” — Chief Seattle

What was the last dream you caught? 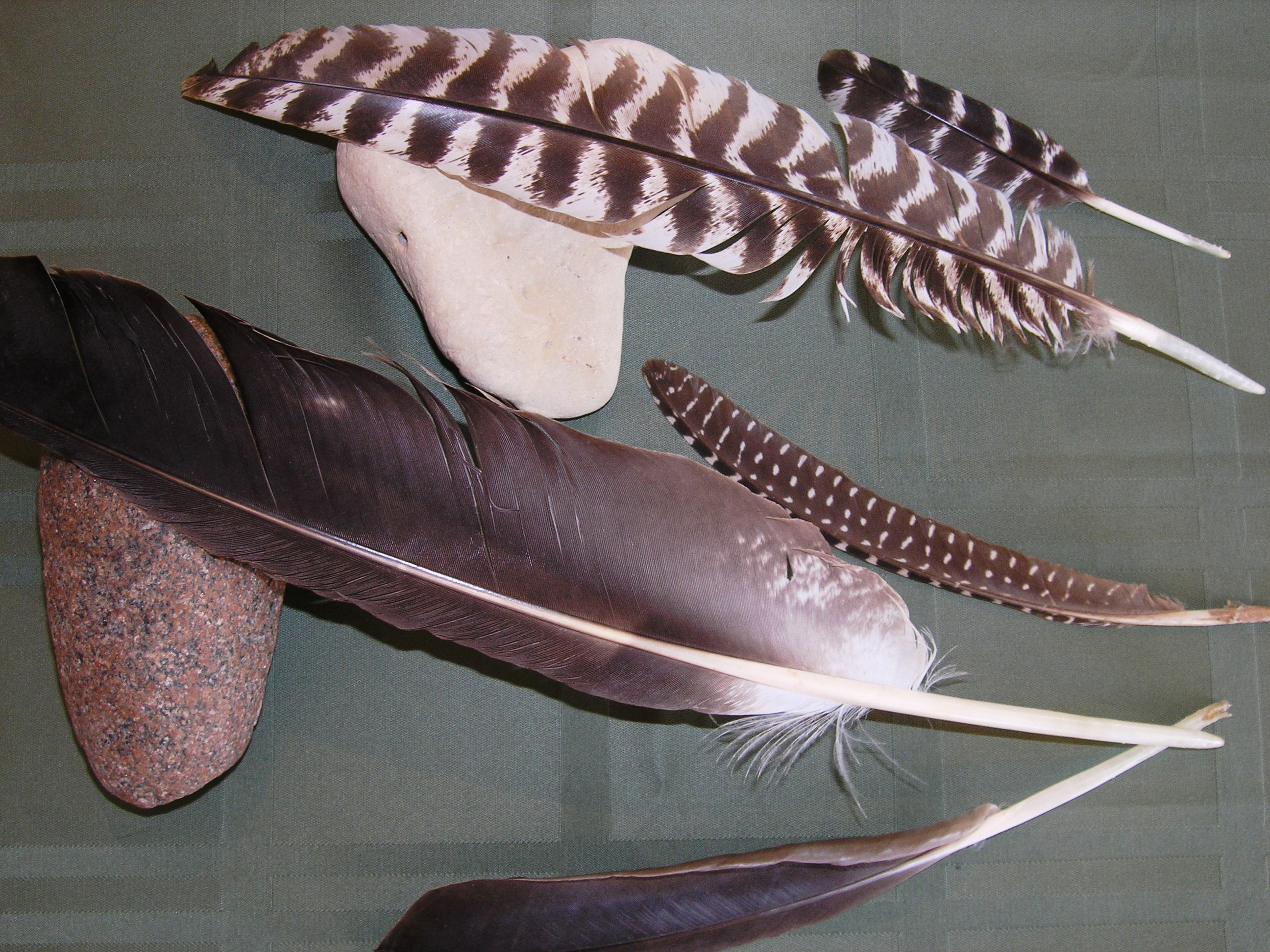 Metaphorically speaking, a feather is synonymous with the soul. Sacred since the beginning of time, feathers have symbolically represented spiritual evolution, truth, speed, lightness, ascension, and flight—freedom of the human spirit.

Native Americans wore feathers to symbolize their communication with Spirit, and to express their celestial wisdom. They also represented the power of the thunder gods, along with the power of air and wind.

Celtic Druids wore ornate feathered robes in ceremonies to invoke the sky gods and gain knowledge of the celestial realm. They believed the feathered cloak along with the presence of the sky gods allowed them to transcend the earthly plane and enter the ethereal realm.

Egyptians believed that feathers were symbolic of sky gods too. Ma’at, the Egyptian goddess of justice, would weigh the hearts of the newly dead in the underworld against the weight of a feather to determine the worthiness of his or her soul.

In Christianity feathers represented virtues—faith, hope, and charity. An image of three feathers were made into signet rings, and then worn as a symbol of a virtuous soul; they were also used as wax seals.

In dreams feathers mean travel or the ability to move more freely in life. White feathers in dreams indicate innocence or a fresh start in a spiritual sense.

The Path of the Feather is the simple practice of going inward and embracing your source of power. It’s a daily journey of spirit that transforms, empowers, and heals. It’s sacred awareness. It’s BEing aware. It’s BEing awake.

Sacred Feathers—The Power of One Feather to Change Your Life by Maril Crabtree is an excellent book. In the introduction she says, “Feathers! Magical, mystical, incredible feathers! Feathers of all shapes, sizes, varieties, and colors. Throughout history, feathers have served as spiritual symbols for shamans and priests, as symbols of royalty for kings and chiefs, as symbols of healing, or a symbol of sacred power for cultures as far back as the ancient Egyptian, Asian, or Celtic eras. These cultures possessed abilities to communicate with nature in ways that have been overlooked or forgotten in our town time.

“Yet feathers are more than history. For many, they are mystical signs, messages, or opportunities. They are scraps of synchronicity in the flowing patchwork of universal meanings. Feathers appear in unlikely places as assurances of well being, as a comforting sign of abundance in the universe, and as unmistakable messengers of hope and encouragement. Their ephemeral grace makes them the perfect emissaries of spiritual and emotional freedom.”

I happen upon feathers all the time—they seem to throw themselves at me out of the clear blue sky. Have you ever happened on a feather, or has a feather ever happened upon you?

Additionally, most migratory birds found in the United States are protected by international treaties as well as U.S. laws. No part of protected birds, live or dead, including feathers, claws, bones, skins, or taxidermy-mounted birds can be possessed without an appropriate permit, which is exceptionally hard to obtain even for legally acquired birds or bird parts.

For those of you who are just joining us, welcome to the University of Life. In the previous “classes” we laid the groundwork for this course—The Color of Wellness, and looked at the therapeutic properties of the colors red, orange, yellow, green and blue. Today’s palette features the color Indigo.Indigo is associated with self-reflection, intuition, and intellectual wellness. It enhances imagination, and understanding. Indigo is a combination of deep blue and violet and holds the attributes of both these colors. It’s the color of ripe blueberries. Think of a deep blue midnight sky, the plumage of male indigo buntings in the summer, or a bottomless mountain lake.

The negative properties of indigo are described as fearful, arrogant, deluded, isolated, and over idealistic.

The healing properties of indigo are sedative and can address physical symptoms such as hearing, sight, sinus issues, nerves, insomnia, and negative states of mind that include paranoia, over-sensitivity, obsession, and hysteria.

When you need a boost in the areas of intuition and self-reflection, indulge yourself with this color. The frequency of indigo stimulates the brow chakra; also known as the third-eye center. It enhances our sense of knowing and helps us to better understand the big picture; to see clearly.

Are you drawn to pure indigo? It calls to mind the emotions of the sea; promoting responsibility and trust in personal intuition. Or do you prefer the noble shaded tones that exude deep thought, contemplation, inner calm and balance? The frequency of indigo enhances our ability to see things from a higher viewpoint rather than from ego, personal satisfaction or material comfort.

What we do with our physical environment—our personal space—speaks to our heart and helps us to flourish. Buy a piece of indigo clothing. Add a splash of indigo to your décor with flowers, pillows, a candle or a throw. Set the stage for nighttime dreams by painting the ceiling in your bedroom indigo. Or take advantage of the healing frequency of indigo crystals such as lapis lazuli, sodalite, or sapphire.

A special thank you to Joseph’s Market for allowing me to take photographs in their produce department.