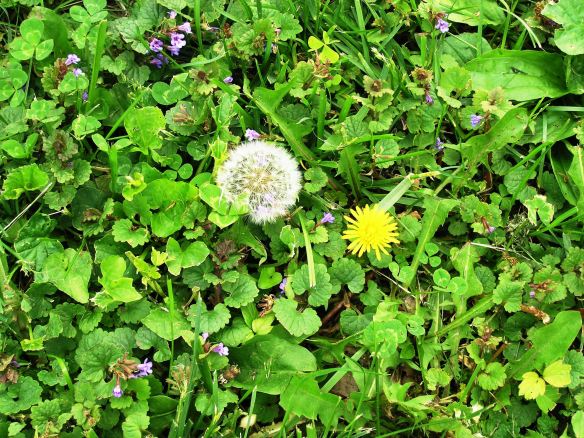 Similar yet Different by Laurie Buchanan

When a dandelion flower matures, its Uranium yellow flower gives way to a puff ball full of parachuting seeds. Similar, yet different—that’s what I’m trying to convey with this photograph. Healing and curing are not the same. Caroline Myss defines the difference between healing and curing as follows in her book, Anatomy of the Spirit—The Seven Stages of Power and Healing:

“Healing and curing are not the same thing. A ‘cure’ occurs when one has successfully controlled or abated the physical progression of an illness. Curing a physical illness, however, does not necessarily mean that the emotional and psychological stresses that were a part of the illness were also alleviated. In this case it is highly possible, and often probably, than an illness will recur.

The process of curing is passive; that is, the patient is inclined to give his or her authority over to the physician and prescribed treatment instead of actively challenging the illness and reclaiming health.

Healing, on the other hand, is an active and internal process that includes investigating one’s attitudes, memories, and beliefs with the desire to release all negative patterns that prevent one’s full emotional and spiritual recovery. This internal review inevitably leads one to review one’s external circumstances in an effort to recreate one’s life in a way that serves activation of will—the will to see and accept truths about one’s life and how one has used one’s energies; and the will to begin to use the energy for the creation of love, self-esteem, and health.”

60 thoughts on “Curing and Healing – The Difference”