As you read this, Len and I are on a little road trip—we don’t know where we’re heading.

We were supposed to be enjoying the Pacific Ocean from the Oregon coastline. But with over 500,000 people having fled because of statewide fires, we opted to head east instead.

The one thing I do know is that Indelible: A Sean McPherson Novel, Book One, hits the shelves on April 6th. Here’s an excerpt. Enjoy:

“Much like a brilliant, multi-faceted gem nestled on the ragged hemline of the northern Pacific coastline, Pines & Quill, a wooded retreat for writers, sits Zen-like overlooking Bellingham Bay in Fairhaven, Washington, holding space to unleash possibility. The mango-colored sunrises and blood-orange sunsets compete in their breathtaking showiness, each vying for the rapt attention of would-be onlookers. One heralding the beginning of day, the other bids adieu, sending it off into the ink-black night sky.”

I’ve turned comments off for this post, but I wanted to share a glimpse of this beautiful location with you. Enjoy!

Last year, on a road trip through Oregon, we saw endless miles of wire fencing stabilized every hundred feet or so by wire-wrapped “pillars” of smooth fieldstones.

The labor involved in that task—harvesting millions of fieldstones and placing them in the wire enclosures—was massive, but serves a practical purpose. The “pillars” provide stability to the fence, keeping it upright.

What provides your stability?

Last week Len, Willa, and I took a road trip to Puyallup, WA (just outside of Tacoma).

On the way back to Boise, we stopped at STONEHENGE. Yes, you read that right. We stopped at the American Stonehenge in Maryhill, Washington.

The Maryhill Stonehenge—a replica of England’s Stonehenge—is built on a bluff overlooking the Columbia River, the border between Washington and Oregon. It was commissioned in the early 20th century by the wealthy entrepreneur Sam Hill, and dedicated on July 4, 1918, as a memorial to the people who had died in World War I. 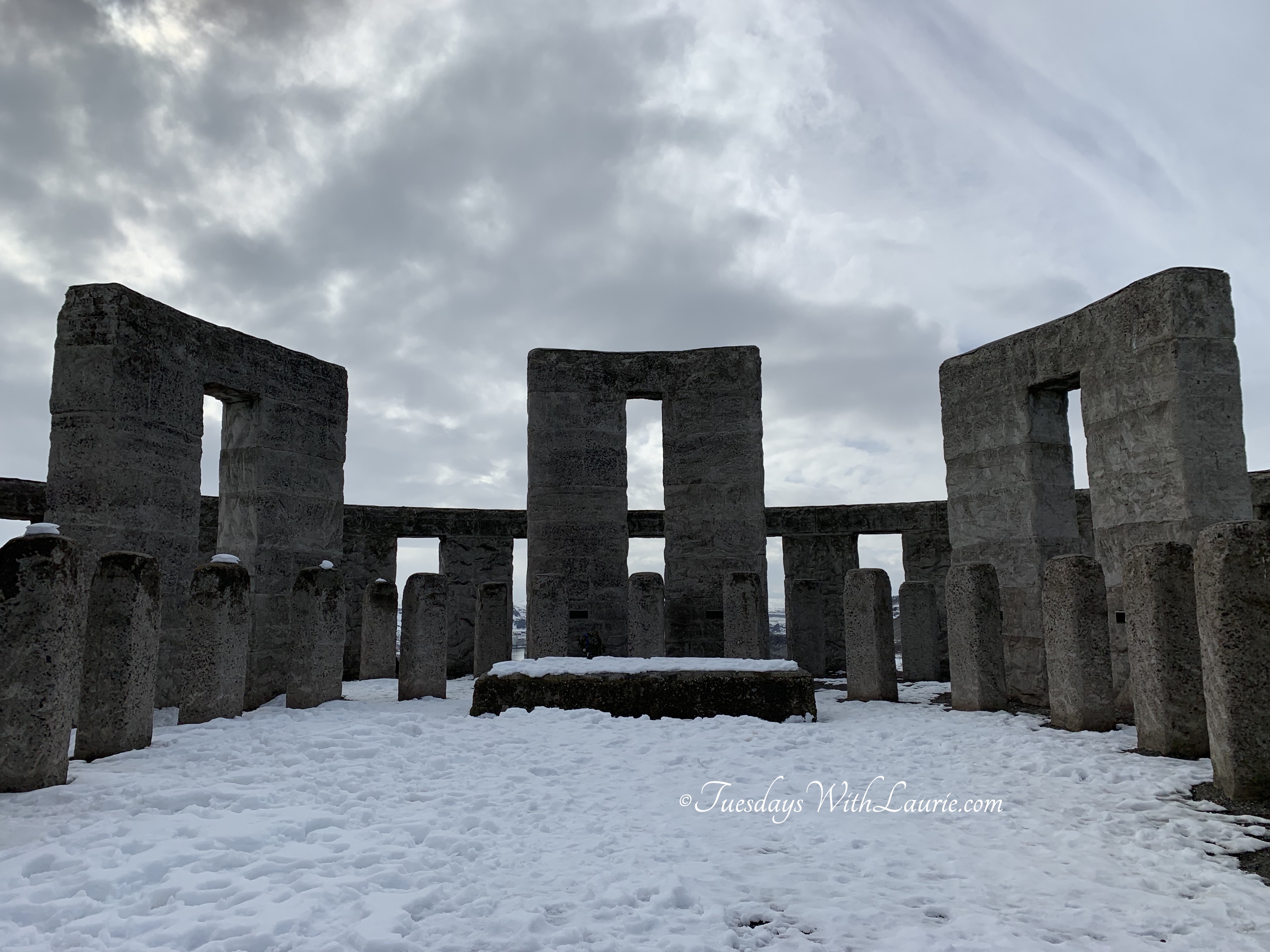 We were wondering if the expression “What in the Sam Hill?” is based on the Maryhill Stonehenge Sam Hill. According to Wikipedia, it’s not. They explain:

“Sam Hill is an American English slang phrase, a euphemism or minced oath for ‘the devil’ or ‘hell’ personified (as in, ‘What in the Sam Hill is that?’). The ‘Sam’ coming from (sal(o)mon an oath) and ‘Hill’’from hell. Etymologist Michael Quinion and others date the expression back to the late 1830s.”

I lived in Washington state for five years and never once heard about the Maryhill Stonehenge. Finding out about it rocked my world.

What’s the most recent thing that’s rocked your world?

Zipping along through the Gold Creek Wilderness Study Area in Oregon, Len and I drove past a roadside tree and then looked at looked at each other quizzically. “We’re those shoes?” we asked in unison. “Let’s turn around!”

Pulling off the road, we saw perhaps a hundred pairs of shoes had been slug up into the tree. Almost all of them tennis shoes, most of them nice. Mind you, we’re in the middle of nowhere. Someone would have to drive a long way out here—on purpose.

A bit of internet research reveals that slinging shoes over telephone pole lines could mean anything from exuberance at passing a sexual milestone, to gangs marking their territorial boundaries. I also learned that the Southwest has a similar practice of placing boots upside down on fenceposts by the side of a road. And in the military, some soldiers pitch their boots over wires when leaving a post. But I didn’t find a single thing about slinging shoes into a tree. Particularly a tree in the middle of nowhere.

If you’ve pitched your shoes in a similar manner, why?