With an immense amount of love and gratitude, I share that this is my final post on Tuesdays with Laurie.

When I started blogging over a decade ago, I had no idea the journey I was about to begin. I’m grateful for the online community that I’ve met, and am fortunate to call friends.

The fact of the matter is, I’m pulled in a different direction and must bring the Tuesdays with Laurie chapter to a close. The decision to step away is difficult but necessary.

Thank you from the bottom of my heart for the years of your support and connection here. It’s meant the world to me.

With thanksgiving and appreciation,

The view “odometer” on Tuesdays With Laurie just rolled over one MILLION views.

Thank you so much for your support in helping me to reach this milestone.

What’s the most recent milestone that you celebrated?

In the United States, we celebrate Thanksgiving this coming Thursday, Nov 22nd. But we don’t have to wait for a special occasion to express gratitude.

And though we live over a thousand miles apart, my sister and I share a practice. Each day before we rise we express thanks for all things—great and small—in our lives. 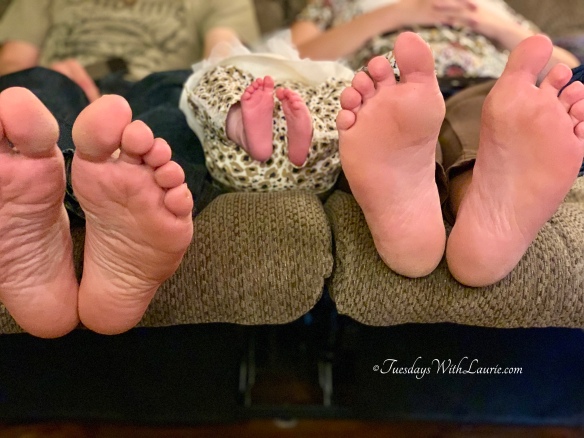 “There is no foot too small that it cannot leave an imprint on this world.” —Unknown

I’m grateful for family, especially the newest little bud on our family tree.

What are you grateful for?

That’s precisely what I look like day 3 after The Incident. My face actually scared squirrels on our bike ride this morning!

Thankfully, it doesn’t hurt as bad as it looks.
Needless to say, I’m incognito …

In Washington , DC , at a Metro Station, on a cold January morning in 2007, this man with a violin played six Bach pieces for about 45 minutes. During that time, approximately 2,000 people went through the station, most of them on their way to work. After about 3 minutes, a middle-aged man noticed that there was a musician playing. He slowed his pace and stopped for a few seconds, and then he hurried on to meet his schedule.

About 4 minutes later:
The violinist received his first dollar. A woman threw money in the hat and, without stopping, continued to walk.

At 6 minutes:
A young man leaned against the wall to listen to him, then looked at his watch and started to walk again.

At 10 minutes:
A 3-year old boy stopped, but his mother tugged him along hurriedly. The kid stopped to look at the violinist again, but the mother pushed hard and the child continued to walk, turning his head the whole time. This action was repeated by several other children, but every parent – without exception – forced their children to move on quickly.

At 45 minutes:
The musician played continuously. Only 6 people stopped and listened for a short while. About 20 gave money but continued to walk at their normal pace. The man collected a total of $32.

After 1 hour:
He finished playing and silence took over. No one noticed and no one applauded. There was no recognition at all. No one knew this, but the
violinist was Joshua Bell, one of the greatest musicians in the world. He played one of the most intricate pieces ever written, with a violin worth $3.5 million dollars. Two days before, Joshua Bell sold-out a theater in Boston where the seats averaged $100 each to sit and listen to him play the same music.

This is a true story. Joshua Bell, playing incognito in the D.C. Metro Station, was organized by the Washington Post as part of a social
experiment about perception, taste, and people’s priorities. This experiment raised several questions:

In a common-place environment, at an inappropriate hour, do we perceive beauty? If so, do we stop to appreciate it? Do we recognize talent in an unexpected context?

One possible conclusion reached from this experiment could be that if we don’t have a moment to stop and listen to one of the best musicians in the world, playing some of the finest music ever written, with one of the most beautiful instruments ever made . . .

… how many other things are we missing as we rush through life?

Similar to meditation, gratitude can be something we practice periodically throughout the day, or it can be a lifestyle—viewing life through the lens of sincere appreciation—of thank you. When we make gratitude a regular part of our daily experience, we set the stage for living more deeply connected to Spirit. As Melody Beattie says, Gratitude unlocks the fullness of life.”

Gratitude is something that can be cultivated and grown. When we feel grateful for things we might ordinarily take for granted—things like our body, the air we breathe, our home, the sky—it’s a good indicator that our spiritual health is in order. When we don’t feel grateful, it’s a clue that we’re “off” and it’s time to make a correction.

Gratitude isn’t only for a select few; for those who have everything going “right” in their lives. It’s for everyone. It’s for when we’re facing adversity; especially so. In fact, loss can sometimes be a bridge to gratitude. Through the practice of gratitude, we can move forward, come what may, whether it’s in joy or sorrow, gain or loss, birth or death.

The beautiful purple tulips in the photograph are from a client who gifted them to me as a way of showing her gratitude.