Living close to the Greenbelt along the Boise river we have tremendous opportunity to see a wide variety of wildlife. When we relocated to Idaho, one of the first tips we received was, “Look up!” Why? In Idaho, a large concentrations of bald eagles are found along Lake Coeur d’Alene, Lake Pend Oreille, and sections of the Snake, Salmon, and Boise Rivers.

We were thrilled to see not one, but two bald eagles on a recent jaunt along the Boise river. We heard them before we saw them. One—already majestically perched on a branch in the treetop—was calling to the other circling high overhead. Like greased lightning, he made a downward beeline, flaring his six-foot wingspan just before landing in the same tree as his mate. 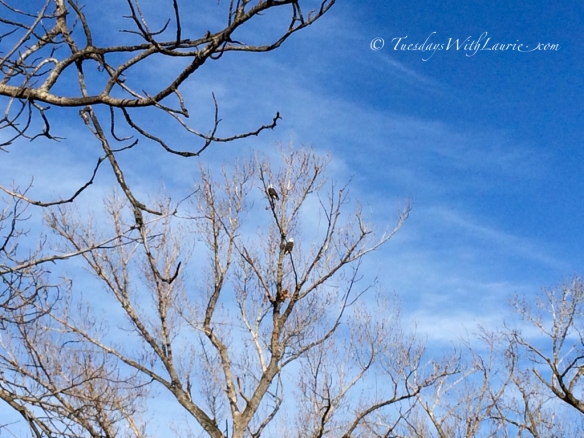 I recently learned that in their first four years of life bald eagles are often mistaken for golden eagles because they sport mostly dark brown plumage with only small  amounts of white. Not until their fourth or fifth year does the bald eagle’s head and tail turn all white, indicating that it’s reached maturity.

When you “look up” in your neck of the woods, what are you likely to see?

69 thoughts on “Bald is Beautiful”