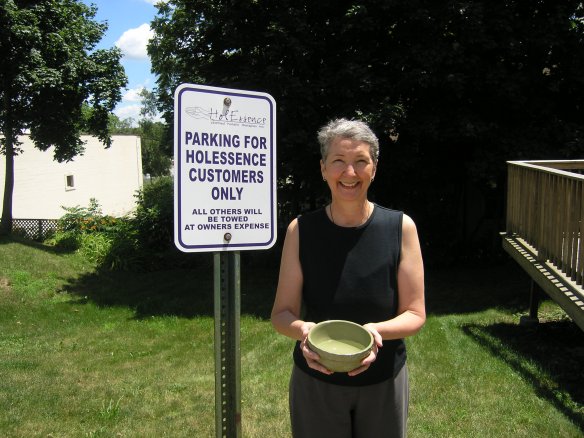 Laurie at the Scene of the Crime by Len Buchanan

Friday, July 9. Straight-up Noon. I’m sitting in my office at HolEssence when my hackles go up. Hmmm, I wonder. What’s going on? I make my way to the back of our building and look out the glass door. There’s a cobalt blue, Pontiac Torrent parked in our small parking lot. All of the windows are down half-way, but there’s no human.

There is, however, a black and white dog with his tongue hanging out. I ask Len to check Google for the temperature outside. “It’s 85.5 degrees outside,” he says.

It’s “Sidewalk Sale” days in historic downtown Crystal Lake., It’s clear to me that someone had a difficult time finding parking on the crowded streets and decided to park in one of our spots – and leave their dog unattended on a miserably hot day.

I head to the basement.

“What are you doing?” Len asks.

“I’m getting a bowl of water.”

“Laurie Jean, you could get bit.”

[I don’t actually see this, but I feel Len roll his eyes at me.]

I make my way out to the car, talking to the dog as I approach. He’s a bit skittish as I reach the bowl of water in through the window. He nervously takes a test lick, then eagerly laps several tongue-fulls  Wagging his tail, he thanks me.

My razor-sharp mind quickly deduces that the owner is female. She’s not only been irresponsible enough to leave her dog in a deathtrap, but she’s left her purse on the front passenger seat. I swear I can hear the scarecrow in the Wizard of Oz singing, “If I only had a brain.”

I motion Len outside and ask him to call Animal Control. An officer in a large, white panel van, amber light-bar flashing on top, pulls in. I quickly bring him up to speed. He says, “It’s obvious she didn’t leave any food or water in the car for the dog. You understand that even though she’s left the windows down, it’s at least 10 degrees hotter inside the vehicle, don’t you?”

“Yes sir, I’m aware of that. And I’m pretty pissed. Just to let you know.”

He knocks on the back doors of the closest businesses looking for the perp (that’s short for perpetrator, for those of you who are new to crime).

Not at Joe’s Barber Shop. Not at Material Girl (a fabric store). And not at Le Petit Marche (the local bakery).

The officer gets back in the Animal Control van and calls the police. An officer arrives within 5-minutes. I keep giving Hunter water. When the Animal Control officer returns I say, “I’ve given him a lot of water. Pretty soon he’s going to pee on her seats.”

The police officer is parked behind the perp in the event she shows up and wants to skedaddle. His light-bar’s flashing too. The back side of HolEssence looks like a murder scene, [only there’s no blood, no body, and no crime tape].

The police officer asks me if want to press charges for unlawful parking when she arrives. “Damn straight,” I reply.

Eyebrow raised, he looks at me askance and says, “Maybe you’d better go inside, in the event of an altercation.”

I know full well he’s concerned I’m going to scold the person who’s responsible for this.

Inside HolEssence I pace, looking out the treatment room window where I can observe, without being seen.

Len says, “Mrs. Kravitz, what are you doing?” (Remember Mrs. Kravitz from years ago? She was the nosey neighbor on Bewitched).

“I want to see what’s going on. Ohhhhh, here she comes now!”

I see a fashionably dressed young woman (early 30’s) sheepishly approach the car, tail between her legs. I can read lips well enough to see that she’s saying, “I’m so sorry, I didn’t intend to be gone that long.”

I see two officers not taken in by sorrowful eyes—probably batting behind her dark sunglasses—and coy pout.

“Way to go, fellas!” I mentally shout, as I jump and fist-punch the air!

I see each of them hand her a piece of paper. The policeman is undoubtedly giving her a ticket for unlawful parking. The Animal Control officer is handing her some type of citation – hopefully there’s a fine associated with it.

The squad car pulls away first. The perp’s vehicle is next; followed by the Animal Control van.

As they’re driving away I shout to Len, “Oh crap!”

What is it now, Mrs. Kravitz?

“I didn’t take any pictures!” I wail; knowing full well that Kathy Drue, Jeff Stroud, and Terrill Welch would have had her mug shot and fingerprinted by now!

So even though I didn’t catch the real-time action, the photo is of the crime scene—the parking space, the sign that clearly says the parking is only for HolEssence customers, and the water bowl I used to quench Hunter’s thirst.

The moral of the story?

Never be afraid to take a BITE out of crime!

Listen with your heart,  Laurie Buchanan

I can see from the tag on the dog’s collar that his name is “Hunter.” He looks to be half Dalmatian and half French bulldog. Without my glasses I can only make out a 708 area code. That means the city – as in Chicago. We’re at least 1.5 hours north by car.